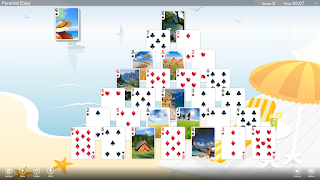 During the last weeks we have been adding a new graphic theme to "Solitaire", the web app that can be downloaded from the Chrome Web Store and to the free solitaire card games available at the Microsoft Store.

A theme is a set of graphic elements, including a background, a card set and a card back.

On the image above you can see the "Pyramid Easy" solitaire with the new "Summer Holidays" theme.

Besides the "Summer Holidays" theme, you can play with all these themes: 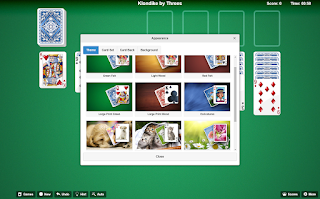 Click here to get "Solitaire" at the Chrome Web Store! 👈👈

If you prefer to download the games on your Windows computer, click HERE! 👈👈
Posted by TreeCardGames at 10:21 AM No comments:

For those of you solitaire players that like to play FreeCell games that are a sure win, we offer the "FreeCell of the Day", included in the "Solitaire Collection Free" game for Windows or in the "Solitaire - Play Online 12 Games" collection (play on your browser).


If you are a methodic solitaire game player, maybe you'd prefer to play, one by one, all the game numbers available. In this case you can use the "Select a Game Number" feature.

You can find both the Windows version of the web version on our website:
https://www.treecardgames.com
Posted by TreeCardGames at 9:49 AM No comments:

How to play Golf Solitaire! (Easy)

In this video, we show how to play the "Easy" version of Golf Solitaire.

Golf Solitaire is a game of British origin and it is also known
as Fan Tan, One Foundation, Les 35 Heures.

It is said that Golf Solitaire is rather similar to Black Hole and Tri-Peaks, as the object of all these games is to clear the cards from the tableau into one Foundation.

This "Easy" version of Golf Solitaire allows to build Kings on Aces and Aces on Kings, which makes this version much easier to win, compared with the standard Golf Solitaire.

Game Hints & Tips:
- If you can play more than one card to the foundation, study the tableau and see which cards will be exposed. Then play the card that will maximize the number of cards that can be discarded.
- Trying to remember which cards have already been discard will be
helpful.

Comments? Please let us know what you think!
Posted by TreeCardGames at 9:04 AM No comments:

How to play (and win!) Yukon Solitaire with 123 Free Solitaire!

This video shows the basics on how to play (and win!) Yukon Solitaire.

Yukon Solitaire is a game of American origin, and it slightly recalls Klondike (the classic and most known solitaire card game), except that there is no deck: the cards are all dealt on the tableau at the beginning of the game, and it allows group of cads to be moved from one column to another, regardless of the piles being in sequence or not.

Game suggestions? Sure! 👌
- Uncover the face down cards as soon as possible.
- Try to keep the foundations even. If autoplay is turned on, don't let one foundation get too far ahead of the others.
- Play cards to the foundations only to free the face down cards.
- Sometimes, you may have a better chance of winning by disabling the autoplay function.
You can play Yukon Solitaire with 123 Free Solitaire online or download it on your Windows 10 computer here Version available for Windows 8 and Windows 7: 123 Free Solitaire - Download
Posted by TreeCardGames at 8:43 AM No comments: