The most popular card games: Klondike, Spider, and FreeCell

Card games have long been a popular pastime, with their early history dating back to 9th century China and their popularity surging in the 1800s. There have been many variations on the card games we know and love today, but some remain firm and longstanding favorites. Solitaire games, and their many relative games, go back to the 19th century and remain just as beloved today as ever.

A trinity of games known across the world

Undoubtedly, three of these popular games top the polls as perennial favorites. Solitaire games Klondike, Spider, and FreeCell, are familiar to almost every card game fan in every corner of the world. Much of this success can be attributed to the inclusion of Klondike in computer’s operating systems, which saw the already much-favored games become a household name. The later additions of Spider and FreeCell cemented their status as the most popular trio of card games worldwide.

The digital age of card games

So how did the digitization of these already well-known games contribute towards their rise in favor? The introduction of computerized versions of Klondike and other variations of solitaire games like Spider and FreeCell has meant these games have become available to a whole new audience. Not having to purchase card decks and not having to worry about space constraints allows anyone to play at any time. Additional features like high score records and personal bests also bring a new element of enjoyment and challenge. Quickplay and easy access allow for players to get a fast game wherever they are, especially with the introduction of laptops and mobile technology.

A game you can play your way

All three games have several different variations (all of which are found in SolSuite Solitaire), meaning players can try out a number of alternative styles of play and set up. You can go for a simple-to-learn, easy-win version of Klondike like Westcliff or Thumb and Pouch. Or, for those who enjoy something a little more intricate, Easthaven adds yet another layer of challenge. Familiar to most card game players, Spider can be played with one deck or more, depending on your preference. Spiderette, for example, utilizes one pack of cards with a Klondike style layout and only seven stacks. FreeCell is undoubtedly the best choice for anyone who likes an excellent chance of success, with an estimated more than 80% of all deals being considered solvable. Unlike other similar games, all cards in FreeCell are dealt face-up, giving it a slightly different approach. 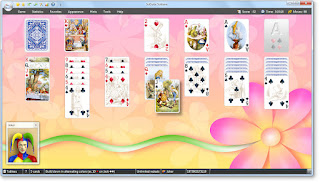 Showing no signs of stopping now…

Whichever of these games is your personal preference, there is no doubting they owe a lot of their longevity to the inclusion in software packages. Klondike, FreeCell, and Spider have made their way into the homes of millions of players across the world, and their popularity shows no signs of slowing. It’s known that these games are the most widely used programs. Digital card games make playing simple, fast, and fun for anyone from novice to expert level - with such an impressive history, we can certainly see why these three games have stood the test of time.

Posted by TreeCardGames at 7:44 AM